High in the mountains of Chile, portable restroom operator Rodrigo Duarte examines a Global restroom that tumbled 400 feet down the side of a cliff and landed in the mining pit where he services restrooms on a daily basis.

Rodrigo owns MegaAmbiente, a portable restroom business in Chile that services copper mines in the arid northern region of the country.   It is here, 12,000 feet above sea level, where you find the richest copper mines in the world.  In fact, Chile ranks number one in the world in copper production and these mines require many portable restrooms to operate efficiently. 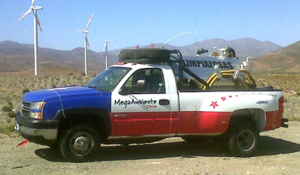 Except for a few scuff marks and five broken rivets, this Global survived a 400 foot fall

Starting up in 2010, Rodrigo began his business with red, white and blue Global restrooms and a 450 gallon aluminum slide in unit from Satellite.  It is a harsh environment and both men and equipment are tested by extreme temperatures and gale force winds.   Northern Chile is also the driest place on earth where no rain has fallen in some regions dating back to the 1960’s.

The mine where Rodrigo happened to be the morning he found the Global at the bottom of the cliff is deep in the mountains, where snowfall is common during the winter months.   The night before,  a storm producing 100 kilometer winds (60 mph) and six inches of snow blew the Global off the cliff.

Rodrigo expected the Global to be damaged by the fall.  Amazingly, the Global was intact.   There were scuff marks and obviously it needed a good cleaning, but the only repair would be replacing 5 rivets. 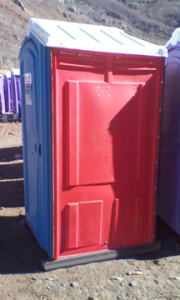 Except for a few scuff marks and five broken rivets, this Global survived a 400 foot fall

Even before the fall, Rodrigo was convinced Global restrooms were right for his business.  The unique Dirtbuster base is perfect for the mines because the dirt and gravel tracked in by workers falls through the open grid reducing the time it takes to clean the unit.   That’s why Rodrigo recently increased his fleet with an order of purple Global restrooms. 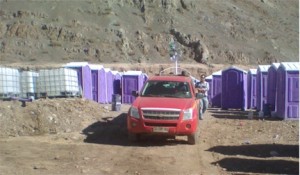 All operators experience harsh conditions running their business.  High in the Andes Mountains Rodrigo probably experiences them more often, but he isn’t complaining.  Being in control and owning your own business in very rewarding, no matter what part of the world you live in.